CODE NAMES for the CLASSROOM

CODE NAMES for the CLASSROOM
(customize scenario based on subject) 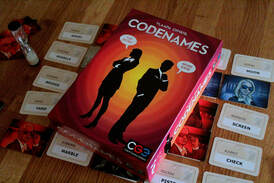 Game Scenario:
Two restaurants have been temporarily shut down due to a failed restaurant inspection. The Executive Chefs are on a race against the clock to find the source of the failed score and save their restaurant from closing forever.
(Change the game scenario to match your content!)
​
​Materials needed:
Game Rules:
1. Divide class into teams of 3 or 4 students.
2. Pair teams up so 2 teams are playing against each other; one red team & one blue team.
3. Select one player from each team to be the Executive Chef (Spymaster in original game), all other team members will be employees.
4. Pass out the following to each team:
5. Have each team come up with 50 culinary words to write on the front and back of each index card. Words can be ingredients, utensils, equipment, or cooking terms. If you teach another subject, you could have them write vocabulary words/terms that relate to your content.
6. Teams will set out cards randomly in a 5 X 5 grid so all line up in straight rows.
7. The Executive Chefs from each team will be given a map card that identifies the cards that are on the grid. The red and blue spaces identify the supplies that belong to each team. The tan spaces are neutral spaces and the black identifies the contaminated card. Use the small plastic stand to keep the map card upright for only the Executive Chefs to see.
8. Each map card has four small rectangles, one on each side of the map grid, that indicates which team plays first.  The team that plays first has one more supply to uncover than the other team.
9. The Executive Chefs will take turns trying to get their team to find their supplies before the other team finds theirs.  Each will call out a one word hint to describe the supplies that they are trying to get their team to identify followed by the number of cards the hint relates to. Ex. tomato 2.
10. Line cooks must make at least one guess, after Chef gives the hint. If they guess the card(s) correctly the Chef covers it with a token of their team color. If it is wrong, it must be covered by the the token that it belongs to according to the map card. If they pick the contaminated card, the game is immediately over and the guessing team loses.
11. The game ends when a team wins by guessing all of their supplies on the grid, or loses by guessing the contaminated card.
This game and storyline can be adapted to any subject area! Would love to hear your ideas!!